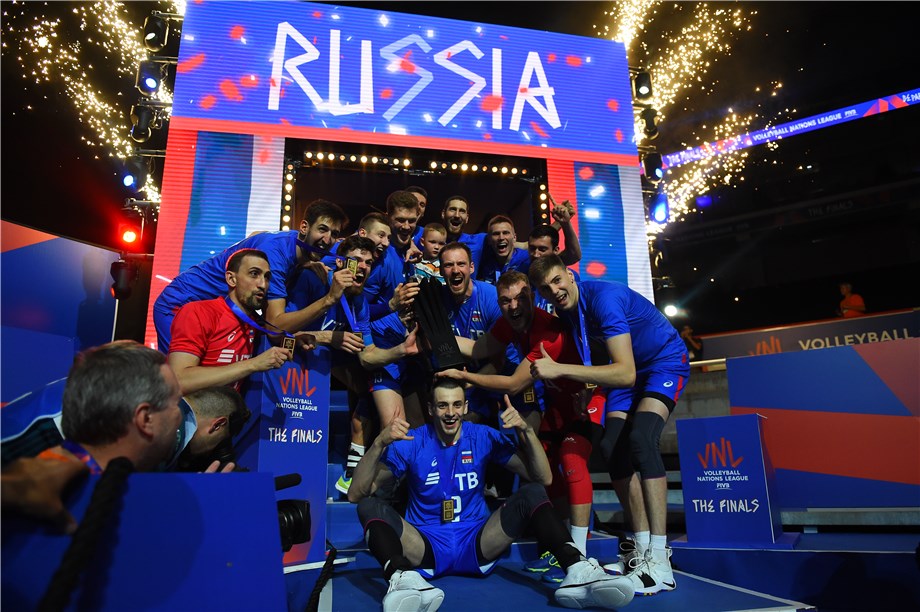 Russia are back on the top of the podium in a world for the first time in five years, after winning the 2018 FIVB Volleyball Nations League in Lille.

Lille, France, July 8, 2018 – Russia brought France’s brilliant run throughout the season to an abrupt end Sunday night in this northern France city, shutting out their opponents in the final, silencing the 10,000-strong partisan crowd and claiming the historic gold medal of the inaugural FIVB Volleyball Nations League.

Russia, physical and strong, proved no match for France, although the hosts did try to get back in the game in the third, before Dmitry Kovalev stuffed Thibault Rossard to bring it home.

It is Russia’s first gold in a world competition since they won the 2013 FIVB World League – though in the meantime they had earned the prestigious title of European champions in 2017.

USA libero Erik Shoji and team mate Aaron Russell get down low for the dig in the bronze medal match of the 2018 FIVB Volleyball Nations League.

Earlier on the closing day of the finals, USA bounced back from their semifinal defeat to France to shut out Brazil 3-0 (25-21, 28-26, 28-26) for bronze. And they must have wanted it a lot, because coach John Speraw stuck to his starting lineup without using a single substitute despite the second and third sets being as close as they get.

It is USA’s first podium appearance in a world competition since they picked up bronze at the Rio 2016 Olympic Games.

This is a text widget. The Text Widget allows you to add text or HTML to your sidebar. You can use a text widget to display text, links, images, HTML, or a combination of these. Edit them in the Widget section of the Customizer.